General notes.This is the Accurate Armour kit of the Daimler CVR(W) Fox armoured car.  It's almost completely OOTB, the only additions being some MV Lenses for lights and a Modelpoint Rarden 30mm barrel to replace the kit one.  Antenna were added from Nitinol wire, which I swear by.  This model is definitely overweathered - this is largely the result of it being the first kit I'd used MiG filters and washes on, and the havoc I wreaked on the poor thing.  When MiG washes say "apply over Tamiya or Vallejo acrylic" they *mean* exactly that.  My initial clear coat was done with Polly S, which the MiG wash promptly ate: along with quite a lot of the WEM Modern British Army Green.  It didn't touch the Tamiya NATO Black.  Figuring it needed a tougher clear coat, I did the hull with Alclad Klear Kote, which I'd assumed (based on past Alclad use) was a lacquer.  It ate that too.  Turns out that the Klear Kote (at least the one whose catalog number begins with 3) was mineral spirit based.  The newer Alclad clear coats whose catalog numbers begin with 6 are acrylic, and supposedly problem-free.  In the end I used a coat of Tamiya Gloss Clear, but all of the unintended stripping of coats  and touch-ups and new coats resulted in a rather scruffy appearance.  If the decals hadn't already been on, I'd probably have just dunked the entire thing in Dio-Sol.  As it was, I decided to weather the hell out of it, with some MiG pigments - a little mud in and around the wheel wells, and a lot of European dust.  Unfortunately the usual pigment fixing issues spoiled the look, turning the light dust into a muddy brown. It's a pretty simple kit to build, with no real hidden "gotchas"; although I'd strongly recommend leaving the wing mirrors off as long as possible, and drilling holes so that the mirror posts have a good positive location.  If you're using something other than Nitinol for antenna, those should be left off too - Nitinol is unkinkable, so I was able to add it quite early.  The use of blue for the vision blocks is just a personal thing - if a vehicle has a lot of black on it (which makes using black for vision blocks a problem) I go with blue.  It's "definitively wrong" but it makes it quite clear what's a vision port. Note that the small white lenses aren't real MV lenses (I've mislaid my stock of the tiny white ones) and are in fact just the red ones with the shiny side out.  New lenses were a last minute addition to this, so they're not as nice as they could have been.  Note that the colors used for the OVM tools are wrong - these appear to be painted in-place, so no nice metal handles or shiny varnished wood.  Although the license plate is a valid one for a Fox, the camo scheme is guesswork put together from half a dozen different sources, as are the other markings. 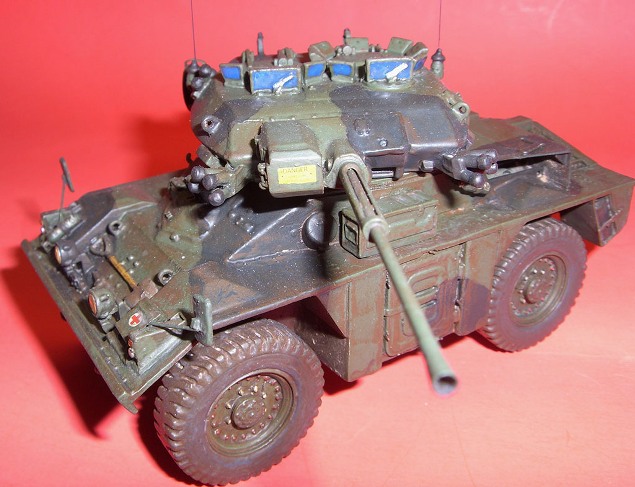 Flash is a bit excessive, and it's evident that I didn't dust the model beforehand (although I suspect that a blast with the air can wouldn't have helped that much).  You can *just* see the very hard to reach areas "under" the engine deck covers.  If you're building the kit, I'd recommend painting these the correct color before you attack the covers.  The side gaps may look roomy, but it's hard to get any paint in there. 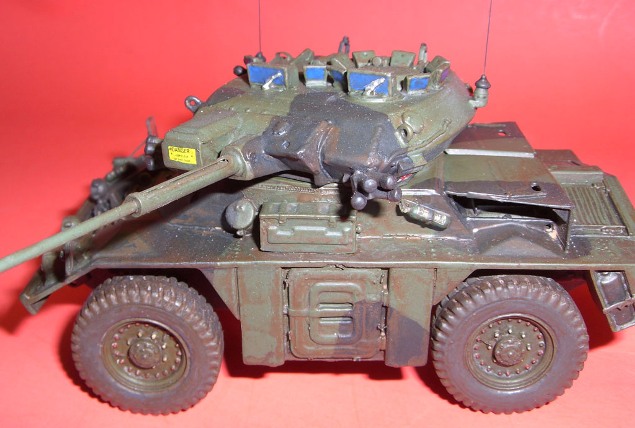 Slightly better angle, less flash glare. I'm quite pleased that the "Danger" sign and the label on the fire extinguisher remained clear.  In the corner on the engine deck cover just aft of the extiniguisher, you can see a small area that's the "real" European dust color.  This thing should have been much lighter looking.  Also, despite considerable effort to place more pigment on horizontal surfaces and less on vertical, the fixing of the pigments basically spoiled the effect completely. 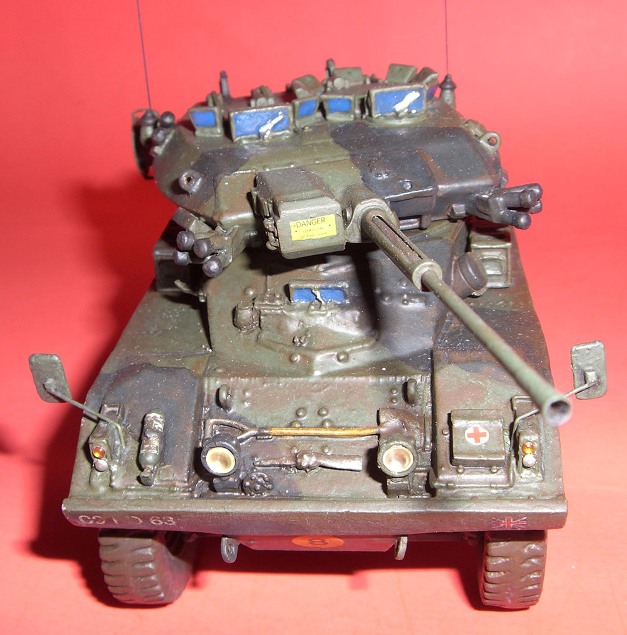 Umm, maybe I should have left this one out.  Looks like a really crappy paint job, to be honest, the lenses look awful.  Some of the lousy surface is actually legit though - the driver's hatch appear to have been a cast piece on the real vehicle, rather than welded. 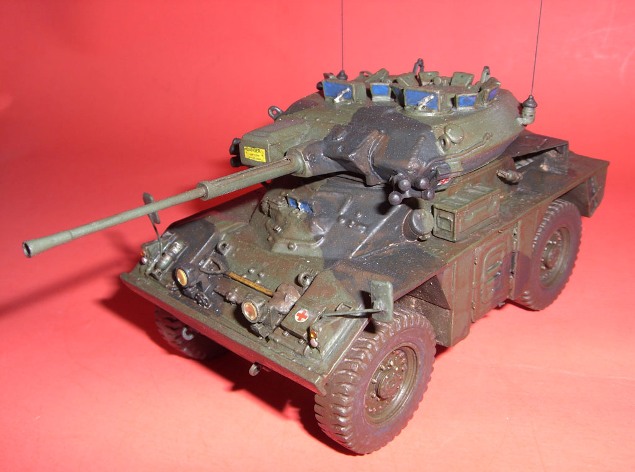 : Hey, this one almost looks bearable, unless you really hate the blue vision blocks!

Token rear view.  This shows some otherwise unseen areas.  It's *really* tough to prevent paint from clogging the very fine mesh in the two PE parts, namely the exhaust cover and the rear turret bin.  Also, without alteration of the kit parts, the turret bin doesn't sit quite correctly - there's barely any gap between it and the engine deck cover.  The back end of the bin should be noticeably higher.  If the hatches look a bit off, that's because they are - both were missing from my kit, so I appropriated parts from an AFV Club M113A1 FSV (with Scorpion turret) that I had spare and replicated the clunkier plastic bits in brass and plastic rod.  Ugh, those rear reflectors bulge way too much.