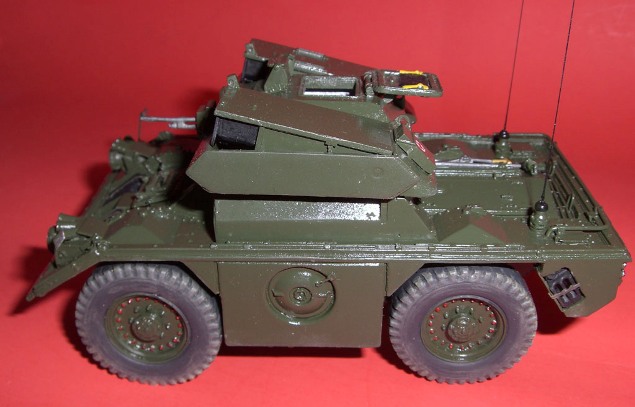 Side view.  The only real weathering on the model was on the tires; just a light dusting and some chipping here and there.  I left off the manual Swingfire sight since a) the part was missing and b) photos indicated that it wasn't always fitted.  Understandable, I think, since manually sighting them would be pretty suicidal - as would having the top hatch open during firing generally.  The kit includes tarps, etc, but these are intended to be mounted on the engine deck and would thus basically be incinerated the first time missiles were launched.  I guess the same should be true of the OVM tools, or that they should really look a bit scorched.  The Mk 5 engine deck was protected against heat by a coat of alumina.  Antenna are made of Nitinol, and the flotation frame on the rear deck, which is a cast together with its clasps in white metal, were replaced by brass and clasps made of PE brass.  The rear deck hoops were also made of brass.  Wing mirrors were mounted on brass parts as suggested, although from past experience I drilled good deep holes at the mounting point to attach them firmly.  The actual mirrors were left off until the very end.  The top hatch interior was painted green with a black vinyl pad and yellow handles.

What happened to that nice green color?  Too much flash, alas.  Quite pleased at the clear contrast between the gloss black (used for the vision ports and turret viewport), semi-gloss (used for the turret hatch pad) and matt (used for the Swingfire launchers and water cans).  The interior of the kit is one of its strongest points although very little is visible here though.  Driver's hatch interior is painted green with some light shipping.  I think you can *just* see one of the fire extinguishers inside the hatch.  The interior of the beast is painted in a light aluminum (Alclad) with lots of nice detail painting opportunities.  AA provides full internal stowage, as well as all suitable radio types - Larkspur or Clansman on the Mk 5 (this model is built as a Larkspur fitted vehicle in the late 60s), while the Mk 1/1 kit gives you a choice of Mk 19, Larkspur or Clansman.  Turret interior is pretty sparse - basically the sight for the missiles and the other end of the MG.  Not clear if there was any sort of additional padding - the vehicle commander has a raised seat that protudes into the turret.  But the way things are arranged, it looks like he might have sat on the turret lip if required to stick his head out of the top.  It may well be that the hatch was purely for exit and egress, and the commander stayed buttoned up otherwise. 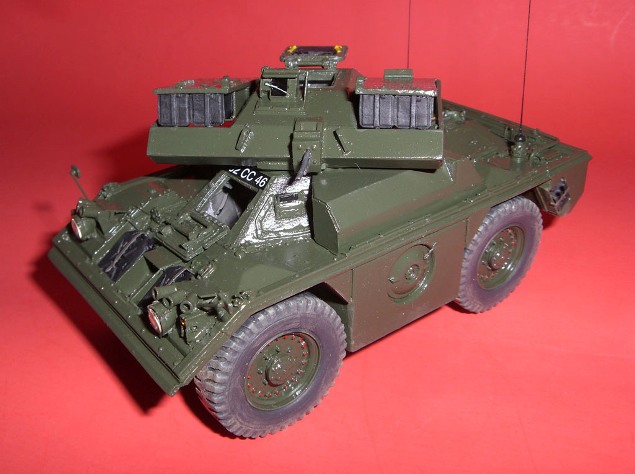 The green looks better here.  I managed to get most of the surfaces fairly smooth to give a suitable finish, but it's unavoidable in some areas; especially since the superstructure was welded to the hull and the Swingfire reload bins were bolted to the side of that.  Despite my best efforts, the surface is pretty messy around what was in earlier versions the front Larkspur antenna mount area.  This was plated over in the Mk 5 (to avoid unfortunate interactions between the antenna and any missiles being launched) so I suppose it may well have been messy on the real thing.  Note that the headlight lenses *do* fit, it's a light trick that makes them look as though they're not fully in their "sockets". 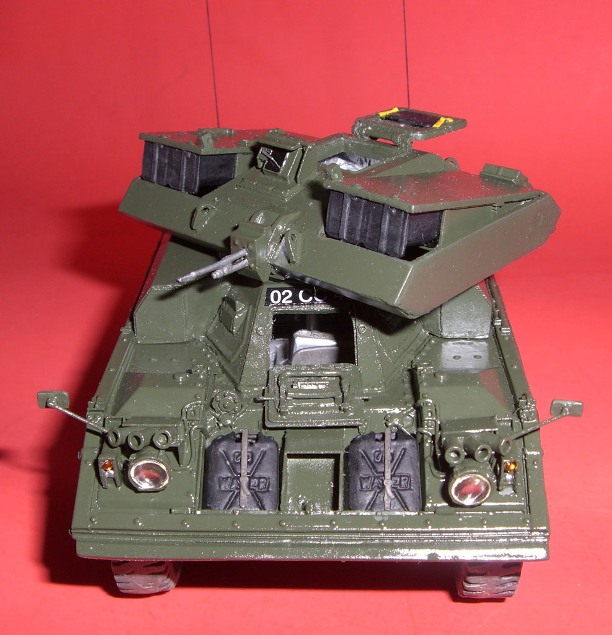 Front view.  A little more interior detail is visible here, in the form of the back of the driver's seat and the case that's stowed behind it.  Note that the seat is actually properly centered in the kit, the appearance otherwise is due to this shot having been taken slightly from the left and the resulting image straightened. 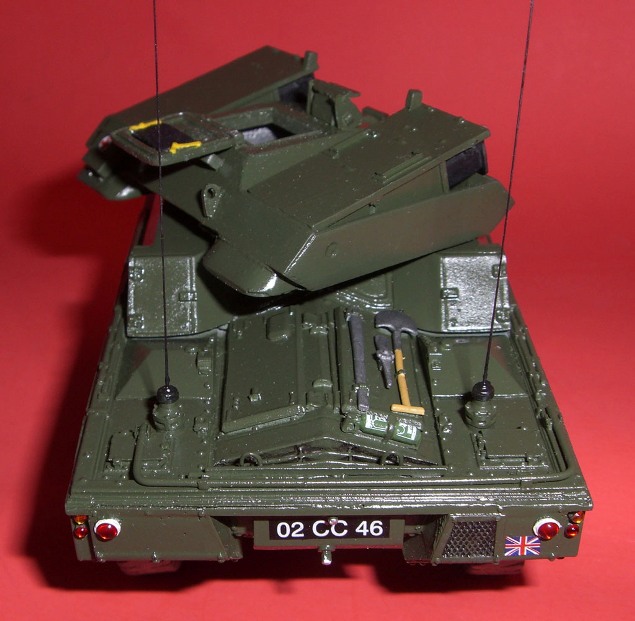 The color here is dark for some reason, but this is the rear view.  It looks a little too glossy here too.  The rear reflectors bug out like Marty Feldman's eyes, ugh.  License number is taken from a Ferret Mk 1/1 sheet, and is *not* valid for a Mk 5.  The replaced brass parts are a bit more evident here, as is the rather nice decal AA provides for the fire extinguisher.  The antenna is very thin Nitinol wire, which "thickens up" in appearance considerable when given a coat of black paint.  The antenna length was based upon Larkspur standards - vehicle mounted antennae were made of 2 or 3 screw-together lengths, each 4ft long.  So the antenna here are 8' scale.  A Clansman antenna would be either 6'6" or 9'9" depending upon the number of sections. 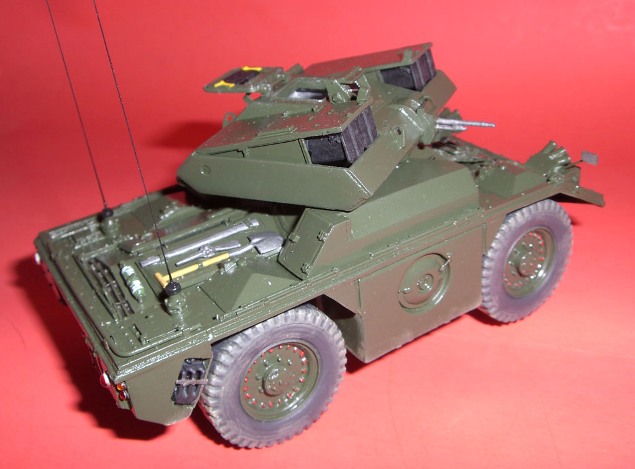 Final view.  The model doesn't look too shiny here; Yay!  Looks quite good (for one of mine) except for those bulbous rear reflectors.