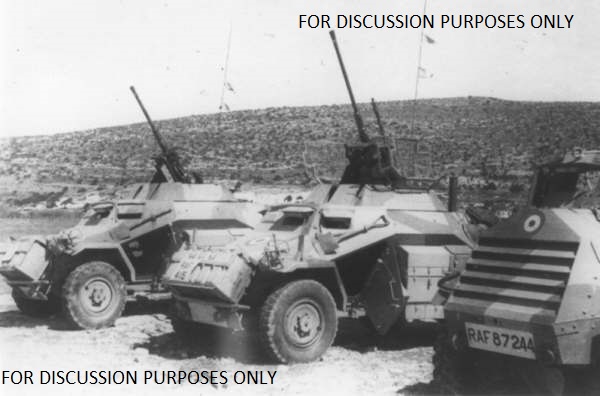 According to unit war diaries and photographic evidence, No 2 Armoured Car Company of the Royal Air Force (RAF) captured four German SdKfz 222 armored cars in the North African desert. They handed in two of them to the captured enemy vehicle pool, but kept and used the other two until 1947.  I've based my model on a photo (above) of the two remaining vehicles in service.  The photo was taken in March 1944 when the unit was based in . The base kit is the old 1/35 Tamiya 222 model, but I added a few small improvements including; a new splash guard above the front visors, some extra detail on the grenade screens, a scratch-built jerry can rack on the front, the wire protective screen around the Notek light, metal driver poles, a Resicast "flimsy" rack (which is artistic license on my part) and Value Gear stowage items. The RAF roundels came from an old Airfix Tiger Moth aircraft model kit. For anyone wishing to know more about RAF Armoured Cars, I recommend a book authored by Nigel W.M Warwick entitled "In Every Place - The RAF Armoured Cars in the Middle East 1921-1953". It's packed with photos of Rolls Royce Armoured Cars, Fordsons, Otters, and everything in between.