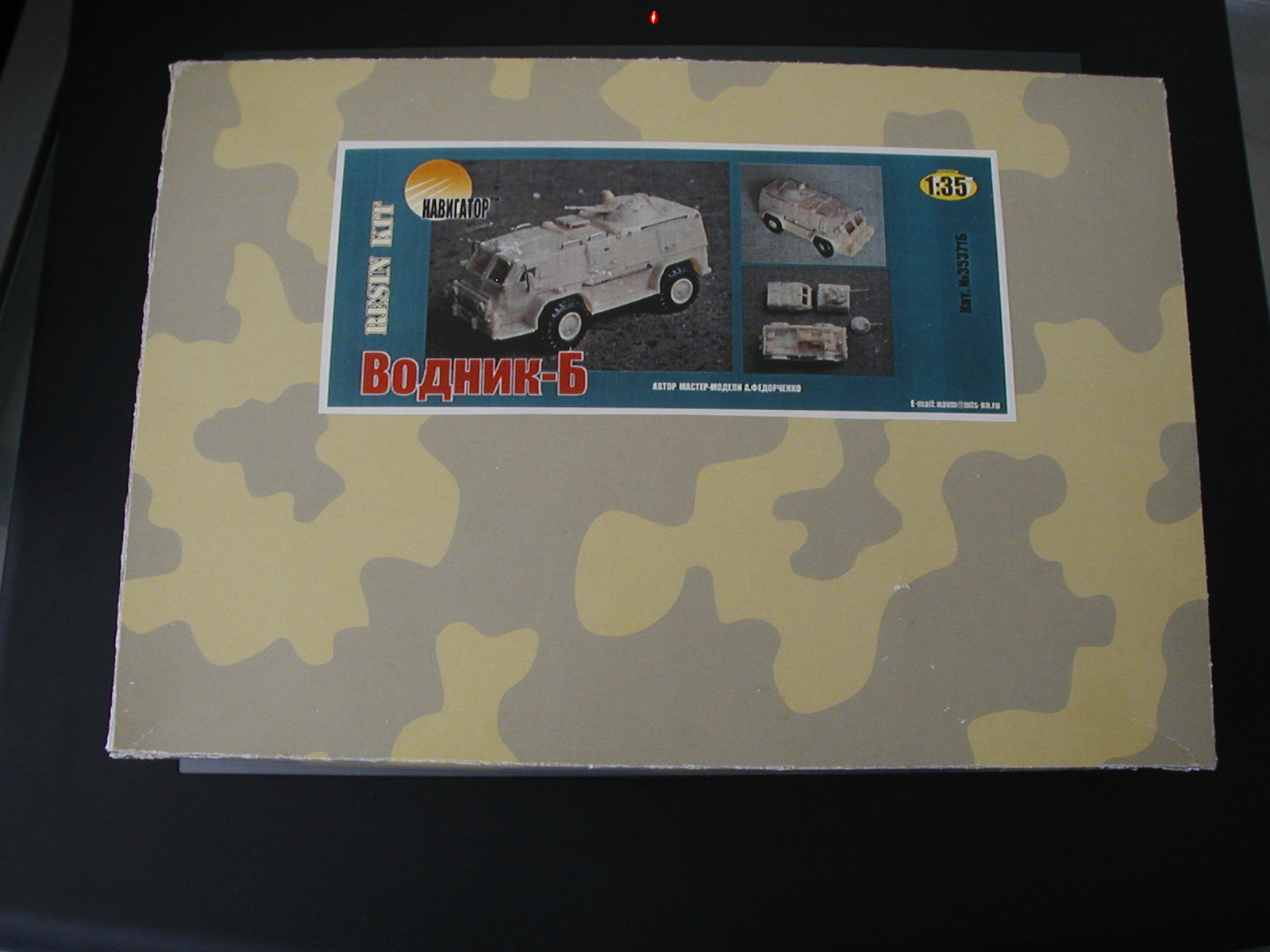 To start with, the company. Navigator's a Russian resin kit manufacturer that I first found out about two or three years ago when I discovered they made a big 1/35th scale Mi-24 (this was a couple of years before the Trumpeter kit) at...well, at the sort of price you'd expect to pay for a 1/35th Mi-24 made of resin.

Then Modelpoint US started to carry more of their range and I got intrigued. All their subject matter is Soviet, all of it is obscure. Almost all of it isn't wheeled, but I'll mention it anyway - they do a nice looking T-34-100 conversion, about six different variations on the T-44, from the original through the T-44-100 to the T-44M, an IS-4, a T-10a, a T-10M, and a selection of obscure SPGs including a 152mm ISU-152 mounted on the IS-3 chassis, another 152mm mounted on the T-10 chassis (with a turret that will look very familiar to anybody who has seen the T-34 based SPG with the turreted 122mm) and, although I didn't find out about them until yesterday when I got this kit, a couple of kits of the SU-122-54, a 122mm SPG based on the T-54 chassis.

Background info next, I guess. The most clichéd way of describing the GAZ-3937 series would be as the Russian HUMVEE. Unfortunately, in addition to being clichéd, it's also the most accurate description. Both are 4x4 heavy-duty off-road vehicles. Both exist in a huge number of versions. Both are much bigger than the vehicles they're replacing. Both are basically wide and flat to keep the CG low. They're even about the same size - the Vodnik is maybe a foot longer and wider at most. They're intended for similar roles.

However, they couldn't look more different. Since Pat's not got anything on the vehicle on the site yet, those seeking to see what I'm talking about might want to look at here although, to be honest, even JED doesn't have much more than a few pictures. Their very different appearances result from engine placement - the engine's mid-mounted in the Vodnik, so the cab's right up front. It also seems to take the idea of modularity one step further than the HUMVEE, probably because of this engine placement, since the "base" Vodnik is just the chassis and engine, and the cab and 'front half' of the vehicle is as interchangeable as the back. So while the back end can be an armament carrier, a shelter, a mortar carrier, or anything else you can think of that'll fit, the front half seems to be offered in both an asymmetric narrow-cab design, which looks great, and in a full-width cab design, which makes it look like some sort of armored minivan. Unfortunately, both kits represent the full-width cab.

So what is actually in the box? Packing peanuts mainly, this is a resin kit, remember? In amongst those peanuts you'll find a single sheet "catalog" of Navigator products, 1 1/2 sheets of instructions and a big bag. Inside the big bag you'll find the four main components that make up the hull, and a smaller bag, the main components and the chassis. The others are the modular front and back top halves, and a tray that sits in the back half to provide a floor for the rear module. Alas, as is so often the case with big components, the chassis of mine had lost a big chunk of mudguard, but that'll be easily fixed. All these main components are crisply molded in cream resin, with lightly flashed over openings that'll be easily removed. There's plenty of them too - the windows, separate doors, hatches galore and the opening for the turret. You can put the four basic pieces together right out the box to get an idea of the final appearance. Hmm, maybe not a minivan, maybe the RV they stole in "Stripes"...

Oh, yes, the other bag. This contains the rest of the resin parts, and further bags. I've yet to venture into the depths of the resin parts here to determine what I've got to deal with in terms of breakages, but most of the parts seem to have been cast into a wafer-thin piece of resin which I've always liked as a way of protecting fragile resin parts. How much of the little pile of flakes that have gathered in the corner of the bag is just scrap and how much should actually be attached to something else, I've yet to determine.

The other bags contain a small sheet of clear styrene or acetate so you can glaze the beast, a piece of metal mesh for grilles, and four tires cast in a black resin that has a certain vinyl-like squishiness. They're definitely resin though, with two tiny round stubs that look very familiar from my own casting efforts. They look familiar in another way too - I've no idea whether this is the case with the real vehicle, but these are a dead ringer for the tires that come with ICM's Ural-4320/BM-21 'Grad' kits. This is actually a good thing, since it means they've got nicely molded tread and sidewall detail and a chunkiness to them that's more monster truck than minivan.

Markings - try and find a picture that represents the right version, you're on your own here. If it helps, it looks as though the turret mounted on the vehicle is taken from a late-model BTR-80, and is thus the one referred to as a GAZ-3937-10 on JED. The subject of markings isn't event raised by the instructions. These look quite Zvezda-ish although some, like the one for the assembly of the front cab, are going to take a lot of deciphering. Also, unless you already read the language, you're going to need a Russian dictionary handy, since the occasional notes on the instructions are only in Russian. However, since they all feature a part number and a measurement like 0,5mm, it's a fair guess that they're suggesting replacing grab handles with brass rod, or something along those lines. Yep, finally located one of the parts referred to by a note, and it's a grab handle. Was that a good guess or what?

Getting back to the instructions, the complexity of the cab assembly step is really a good thing, because it's an indication of the level of detail involved. Looks like it's got a full interior, front and back, with one exception - the turret assembly is simple and familiar and it wouldn't surprise me if the master for it came from a Zvezda box. Now the BTR-80 turret interior isn't hugely complex - it's not as if it has any hatches in it - so it may be they just figured it wasn't worth the effort, but once they've given you hatches that can be attached in the open position, ditto vision ports, and some seats for the inside, the urge to find some photos and throw in a mix of suitable equipment to clutter things up a bit is unavoidable, so I think I'm going to have to go through some of my BTR-80 photo references and see what I can add from scratch.

While this doesn't look like a hugely intimidating kit (when you've got Panzershop's Dana sitting in the build pile, nothing looks intimidating, with the possible exception of Aber's PE sets for the FAMO) it's probably got a few too many pieces for a first resin kit (in the AC realm, I can't think of anything the looks much more suitable as a first resin kit than something like Accurate Armour's Fox, or maybe one of the Ferrets). However, if you've got one or two resin kits under your belt, I don't think it'll give you any great problems, and it'll be a great addition to any AFV collection - most people haven't even heard of this thing, let alone built a kit of it.

Kit courtesy of my overstretched credit card, and purchased from Modelpoint US (http://www.modelpoint.us) for $89.95 plus $6.75 shipping and handling.

If this review's been of any use, let me know. I may not be able to afford to buy kits very often these days, but the build pile has a *lot* in it that might be of interest to WarWheels readers, and I'd be happy to do a quick in-box review of anything I've got, with photos even. Pat K, you still have that list of "everything Al has in the pile that's an armored car"? I know I've lost my copy.

I didn't notice it until afterwards, but while the kit tire pattern appears to be the same as the Ural-4320, almost every photo I can find of every version I can find appears to have the same type of wheel as the open-armored kind used on the BTR-70/80.

I'm not going to assume a mistake on Navigator's part, rather I think it may be the case that there's more than one tire type used. The tread of both tires is very similar, but the BTR wheel has a much smaller hub and different shoulder tread.

I may investigate further - I love the fact that nowadays if I need to find information on a Russian armored vehicle, if it's contemporary there's a good chance I'll be able to find a web sit for the manufacturer. In the case of something like the Vodnik, it wouldn't surprise me to find a selection of distributors too, since I can see the civilian versions of this being marketable in the Real 4x4 (as against SUV) market.

That said, I've often thought that importing something like this or even one of the unarmed variants of the BTR-80, if it was street-legal, would be a great way of reducing how often you get cut off or tailgated. Of course, anyone looking at it would also make certain assumptions about your being insecure about certain areas of your anatomy, so, uh, perhaps not.

I will leave the almost equally controversial topic of "which replacement BTR wheel should I buy" for another day.