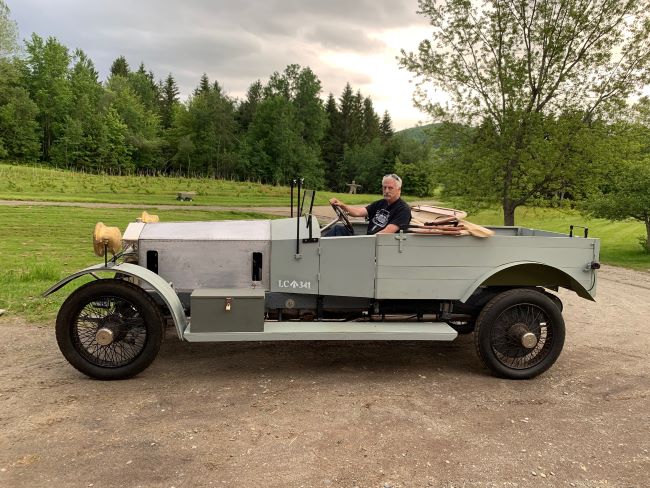 The following information was provided to me by James Stejskal about the construction of his reproduction Rolls-Royce Tender “Rhino”.

Mr. Stejskal is the author of “Masters of Mayhem: Lawrence of Arabia and the British Military Mission to the Hejaz”. Among many other subjects, his book covers the formation of armored car sections and the use of the vehicles in action.

The “donor” vehicle is a 1919 Rolls-Royce 40/50 'Alpine Eagle' civilian Roadster, which is virtually identical to the 1914 vehicles used for the Rolls armoured cars and tenders used during WWI.  A short history of his car is that it travelled between England, France, Spain, and Portugal routinely in the 1920s, was in Kuwait and Saudi during the 1940s as an oil exploration engineer’s car and came to the States in the 1960’s.  For more detailed information, you can check out the Rolls Royce Roadster Information Sheet at the end of this page.  Mr. Stejskal is actually in the process of restoring the original civilian car body, but in the interim he decided to build a Tender due to his interest in Lawrence and to have something with which to carry the books around.  For more detailed information about “Rhino” or Rolls-Royce Tenders in General, see the Information Sheet at the end of this page.

Starting from a true basket case he first rebuilt the car to the restored chassis you see in the first photo and then built the Tender body on top of it, using period photos and diagrams. It incorporates features seen on several of the cars which were all built in the British depots in Cairo or Alexandria.  The body was built on an ash frame with wood and steel external sheathing. The car’s name, “Rhino” comes from the name the African Askaris (soldiers) gave to the Rolls-Royce Armoured Cars in East Africa: "The rhino that spits lead".